Skip to end of metadata Go to start of metadata
User Groups allow you to define groups that can be used to simplify the process of configuring a project. These groups can be used in addressing and security as detailed below, and allow Project Administrators to manage the group members throughout the project as different users come and go.

Where can they be used?

User groups can be used in the following areas:

If a group has multiple members, it can only be used where the document type allows multiple action people.

Notifications will be sent to each members in the group based on their individual notification settings.

5. The list of Status Approvers for a particular form.

1. Who can create each document type.

From June 2019, User Groups can be used when configuring action buttons for security and access purposes. 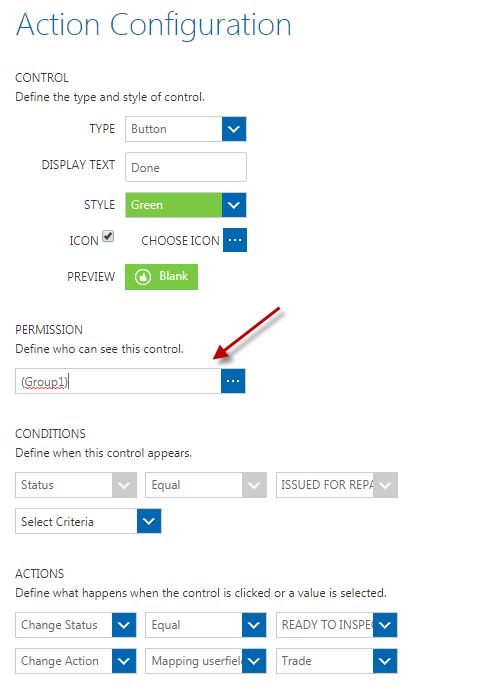 Who can create and edit groups?

A Contacts Module Administrator, which by default includes Project Administrators. Basically, if you could previously create companies, you can now create and edit groups.

How can I create a group?

Under Contacts, you will now find a groups button in the toolbar. 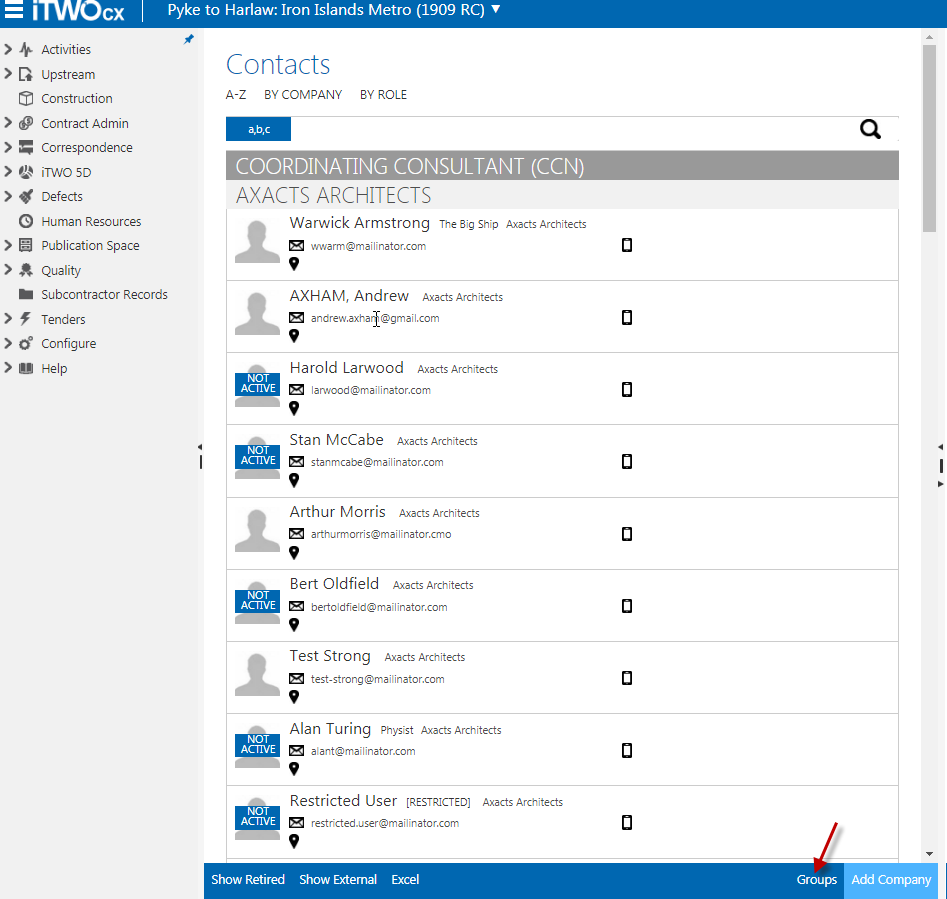 From there you will get a list of all current groups, and to create a new group, just click Add Group. What does allow multiple mean?

As groups can be used in addressing, quite often a form can only be actioned to one person at a time. If you have a group that has more then one member, it cannot be used in one of these form types.
This setting is there to help identify the groups that do allow multiple members, and to prevent additional members to be added to groups that have been used to action forms to.
If a particular form does allow multiple attention people, then this setting can be enabled, and the group can still be actioned.

What does enumerate mean?

If the group is addressed on a form, when submitting the group will be swapped to the actual members of the group.
This means you can use groups to greatly simply the configuration of a project and in the situations where you want a form to actually be sent directly to a user instead of a group.

For example, I created an NCR form that was sent to the Quality Manager (QUALITYMANAGER) group. When submitting this form it swapped (QUALITYMANAGER) to RB-QM. This means any reports or dashboards will now show that the NCR form is now for RB-QM's action.

Can a group contain another group?

Yes, a group can contain another group, so long as that group doesn't already contain the group you are trying to add it too causing a circular reference.

How do I use a group in configuration?

Wherever you are normally typing in a User Code, or Company Code etc. you can now type in (GROUPNAME) as well, which will allow access to all users that belong to that group, or a group / company within that group.

User Groups are now also available within the Contact Picker: 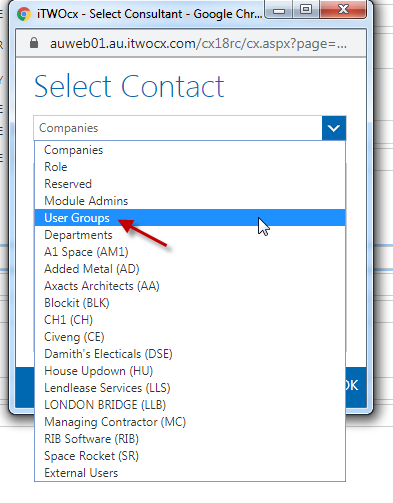 How can I use groups with distribution rules?

As part of adding the group functionality, we revisited distribution rules and have improved them to allow:

1. Applicability of distribution rules now supports groups, multiple companies, specific users etc. Basically anything you can come up with the +/- security rules. (For example _CNS,(MANAGERS),RIB-*,PA-PA)

2. Rules can now be applied to one, many or all form types. This means instead of needing to create separate rules for form types within the same module, you can now create a rule that applies to Action Points, Test Requests and Survey Requests all in one go.

To accommodate this new functionality it has meant we needed to review how distribution rules are applied, as its now much easier to have many rules apply to the same form type.

The result is that distribution rules are now processed in order from top to bottom that they are shown on the configuration page: 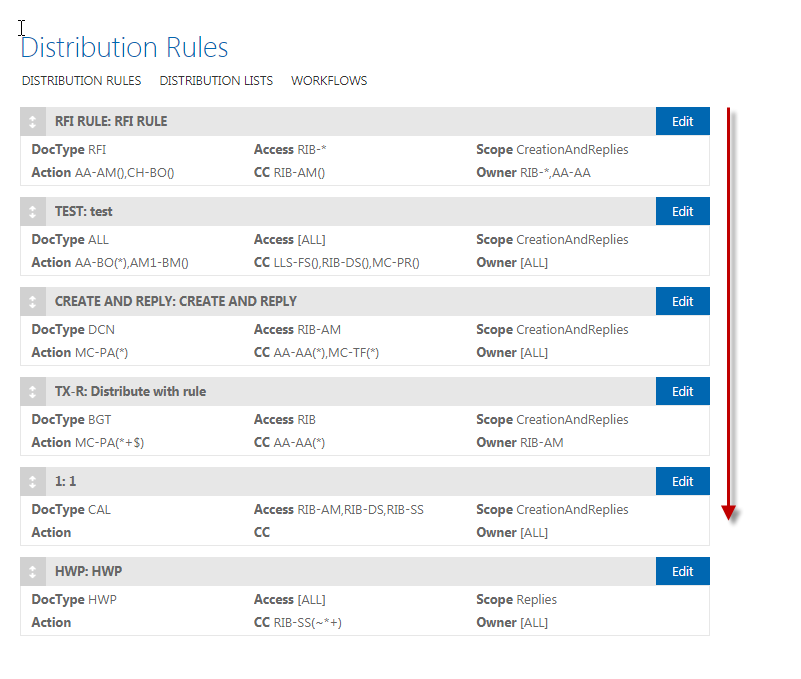 By clicking on the move icon in the top left, the order of the rules can be easily changed by any Project Administrator.

How do I use a group in addressing?

You can either select them from the address book:

Or type them in manually either in full with (GROUPNAME) or a part of the name GROUP. After hitting enter if it detects multiple matches, it will highlight in red so you can double click and select the correct one.

How go groups work with the who talks to whom matrix?

In addressing, you will only see and be able to address groups where based on the who talks to whom matrix you are allowed to communicate with all members of that group.

This means, if there is one person in a group that you are currently not allowed to communicate with, then you won't be able to see or address that group.

Can I see what groups a user belongs to?

Yes, if you don't have access to the groups configuration page, and you can view the the users contact details, there is a new section that lists the groups they are part of: 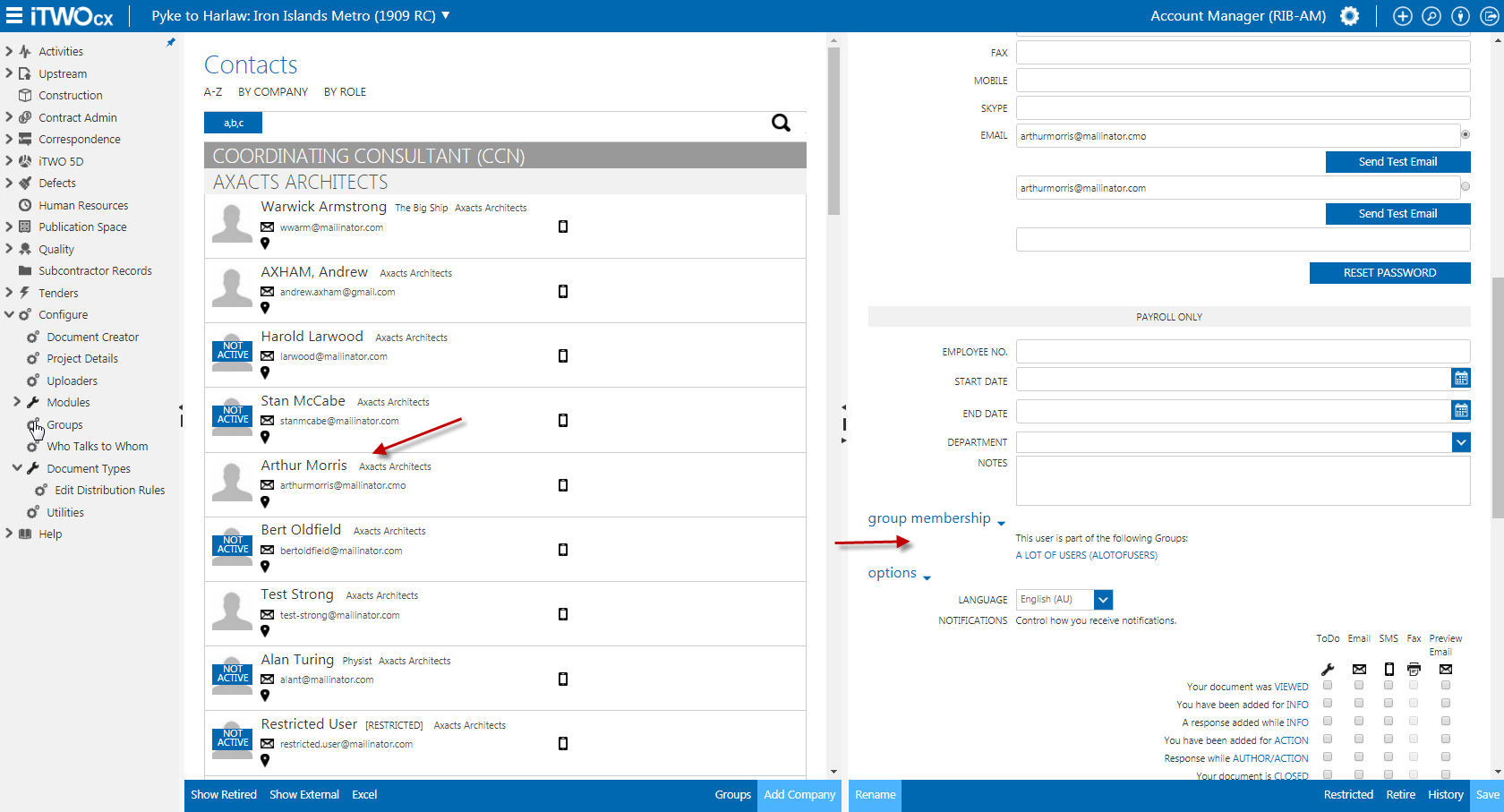 Is anything else effected by this change?

1. Due to the complexity of implementing this change, we needed to introduce a concept in the background that ties all the different user, company, group containers to a common entity that can be used to check security and addressing rules.
As a result of this, System Reserved terms will now be shown with square brackets around them.

2. Departments have been upgraded, so that they can now also be used in addressing and security.

3. Teams have been replaced by user groups, and any previously configured will be automatically migrated to user groups as part of this release.